Of everything I have ever learned as a literary agent and as a writer, there is one lesson that I think is more important than any other: you must write for your life.– Holly McGhee, Nanowrimo 2013 Peptalk 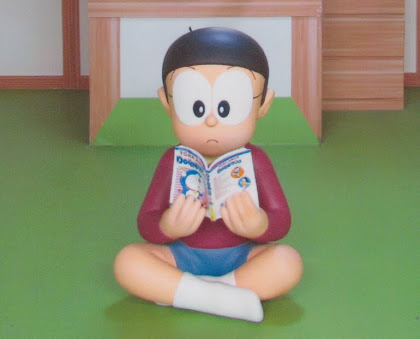 Nobita reading a Doraemon comic, from the 100 Years Doraemon Exhibit

When it comes to writing stories, I’m not the kind that plans. I’m the kind that researches what I need, rolls into what I think I want to happen, and then see if there’s a correlation between what I want to write and the culture I’m taking from. Which is how I usually end up with stories set in different cultures, in piecemeal settings that merely hint at the culture I’ve borrowed from.

So yes, I’m pretty much a pantster, as we’re called in Nanowrimo. It brings to mind one of my favourite mantras, which is “Write Drunk, Edit Sober” (side note: Since I can’t actually consume alcohol, I tend to substitute this with cheap sugar and/or food that loosen my inhibitions. Friends who’ve seen me get “high” know what I mean. No weed involved).

Ever since the submissions for Women Destroy Science Fiction and Buku Fixi’s Lost in Putrajaya anthologies were announced, I’ve been hatching ideas and short stories to submit. None of them though, fit what I wanted to say.

Till, appropriately, the very last minute. I submitted the Science Fiction piece the night before, while Lost In Putrajaya’s was submitted MINUTES before the deadline. I fully expect LIP’s piece to be rejected (received the notice for SF’s piece some time ago) but it’s made me want to write more. To let go and just let the words flow, no matter if they were nonsensical or simply words.