So am on a cooking kick. I want to cook and make stuff. Then I was shown this recipe by Ganaesh, and well, I decided to give it a try.

Three items, but I substituted the cranberries for mixed choco chips, and the bananas for water. Both were because I preferred something crunchy over mush and not a fan of bananas.

This was what it looked like in the bowl:

I used a rough 1:1 measure for the oats and peanut butter. By this I mean 300gm of uncooked oats to 3 tablespoons of peanut butter. Then I began to mix. I found using a spoon to be quite ineffective, so I switched to hands instead. The process went MUCH faster after that.

Mixed with some water

The recipe said that if I wanted to substitute the bananas, I could add a few teaspoons of water. Which I did. Once you work the tiny addition of water into the mixture, it’s time to firm them up. 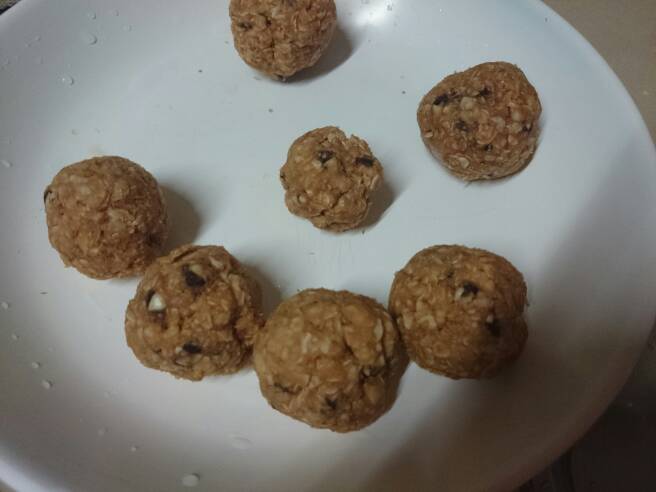 Seven balls, in a smiley face

So now that they were done, it was time to toss them into the fridge. The recommendation is to leave them in there overnight, but I did just have one after they were in for about 2 hours, and it was delicious as a snack. I will probably need to make more over the weekend. This is delicious.