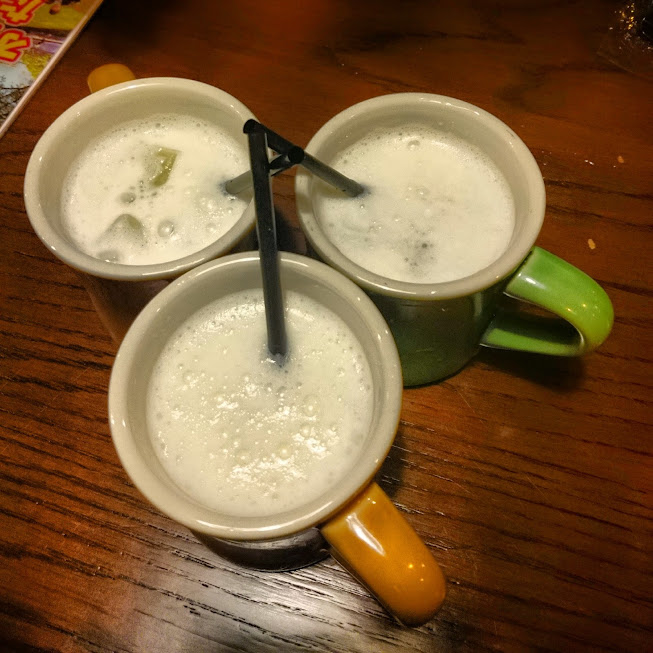 Three cups of lassi, taken in Sapporo, May 2014

Today is day 3 of swearing off dairy, and I pretty much failed epically. Drank two cans of Nescafe (Classic) and now I have a minor headache building up, though that could simply be because I was trying to avoid caffeine as well.

It has been an interesting 3 days though. Yesterday I was so tired, I went home and slept for almost 10 hours. It was broken up into two sessions; the first at 4 hours (which is the longest “nap” I’ve had) and the second was for 5.5 hours, which lead to this morning.

My appetite seems to have disappeared too. I expected after having that large meal yesterday and a teatime snack that consisted of soya bean milk and Snickers that I’d be hungry this morning, but I didn’t, at least not until lunch time. The day before, I only had two meals, both of which I’d consider to be so-so portions, but I still did not wake up ravenous, which was a first.

However, on a plus note, my tongue seems to have cleared up. I used to notice this really thick coating of white on my tongue which built up after a few days, but today it was rather thin. Shall do a comparison when I get home again later, but if it really is so, then I’d consider it a plus.

In case you’re wondering, I stopped taking dairy-related products and food because I had a phlegm thing happening last week. It wouldn’t go away after a few days despite seeing a doctor, so I decided to stop taking dairy products as suggested by my previous doctor to see what would happen.

So yeah, consider this an interesting experiment.