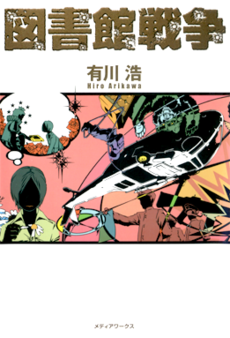 Plot: A girl joins the elite Library Task Force to protect books and chase after the man who inspired her to join. Along the way, you realise the kind of concessions one makes to be an adult, and just how refreshing it is to see it being spelled out plainly instead of full of melodrama and long monologues that most people would be out of breath actually practising.

Rating: Five out of Five

Rationale: I’ve read some other Japanese light novels that have been translated. They tend to be error-free, or at least to a minimum, but what usually irks me about them is how unnatural the language is. It is no one’s fault; in most cases, I would usually ascribe it to the translator’s naivete or inexperience. Most translations that irk me either have simple grammar structures or sounds stilted.

The translation I’m reading of Toshokan Sensō is tentatively a fan one. Someone actually took the trouble to get their hands on the original books and then translated them for a manga-reading audience. They also managed to keep, I think, the language of the novel without turning it into something else entirely.

I really enjoy reading this series. Part of it is because I enjoy the characters and the plot. A larger part though, comes from enjoying a well-made book. I love the characters and settings of Arikawa-sensei’s books, but I love melithiel’s translations equally as well.

However, it is the principles that these Librarians stand for that pull me in.

Books are sacred. They contain ideas, thoughts, and perhaps most importantly, experiences wrapped up in stories. A book you read, a book enjoyed, a book savoured, even a book discarded, all of them leave a mark on you. It’s inedible. We may wish that some books were never written, but books, once published, should not be censored.

However, there are those who insist such things should be censored. That all reading materials should be inspected and censored to fit the sensibilities of these small-minded people (I wonder how many of them read for pleasure, as opposed to reading for image?).

It is against this backdrop that Toshokan Sensō takes place. The Librarians defend reading materials against the Media Betterment Committee, which seeks to censor such things. Raids happen unexpectedly, leading to books travelling under armed guards, with attacks on public libraries to remove such books and materials from locations the public could gain access to.

It sounds ridiculous, but it really isn’t. It speaks to me as a reader, of fears what book banning will bring, what it might do to a society. Of a world where “A world where the library didn’t have to take up arms to defend itself.”

Aka a world where the freedom to read, not to express, but merely READ is curtailed so strongly.

Go read Toshokan Sensō. If you love books, you owe it to yourself to do so.